Searching for ludicrously cheap video games is fast becoming something of a Friday lunch time tradition for my work mates and I. Recent trips to the local branch of Cash Converters have yielded some outrageous spoils, the likes of Popo LoCrois (PSP), Sonic Jam (Saturn) and Colony Wars: Vengeance (PSX) were all picked up for under £5 (in the case of Colony Wars, it was only 99p)!!

Last Friday's foraging was equally fruitful, and I snagged the bargain of the day...the fantastic Taito Legends 2 on the Playstation 2, for just 2 English pounds (lots of twos there sorry!). That's £2 for a disc (which looked brand new) loaded with 39 arcade games from 1979 right through to 1996. Now I know that every one of these titles pre-dates the PS2 by many years or even decades in some cases, and the rehashing of classic arcade games is an acquired taste but regardless of that, most of these games have more heart, soul and depth than a lot of the generic muck we see cluttering the shelves at present.

Upon firing the disc up, you're greeted by a sweet intro, showcasing all of the classic games on offer, and much to my surprise and joy, this slick show is also accompanied by some quite gorgeous music...more thumbs up action from me. The games themselves are sorted chronologically which unfortunately means that you'll initially be greeted by some decidedly ropey looking and underwhelming examples of gaming from the early 80's. Things soon pick up though and in a big way too, everything from the late 80's onwards is bullet proof, and you're soon rolling in SHMUPs, scrolling beat 'em ups and addictive puzzle games.

At this point, rather than wade through all 39 games individually, I've just picked out my five highlights from the collection for further inspection:
Kiki Kaikai (1986) 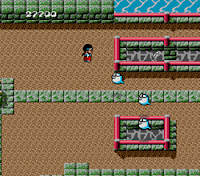 The ancestral grandfather to the Pocky and Rocky series (which I absolutely adored), Kiki Kaikai is a old style overhead run and gun game...only there are no guns, just Japanese cards and a wand! It is set in that cool period of feudal Japan, which comes complete with a ton of mythological spirits and monsters trying to put an end to your plucky character, Sayo-chan. The gameplay is fairly basic but it's also really addictive, and I was taken aback at just how difficult the game can get. The cute graphics still hold up (quite) well, and although things do get a little repetitive, the setting makes a nice difference from all the sci-fi styled offerings that are the norm with this kind of game. 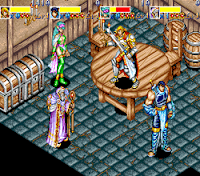 Being a big fan of scrolling beat 'em ups and also being partial to the odd isometric game as well, I was fairly embarrassed to discover that I'd never even heard of Dungeon Magic before buying the Taito Legends collection. This game is quality, plain and simple. If you harbour any fondness for scrolling beat 'em ups then you need to play it. The characters are chunky, brilliantly animated and look intricately detailed, it's also nice to see that even the enemies are given this treatment. In fact, this game looks so impressive that it could easily pass for a Neo Geo title...which is ace in my book. Neither the story nor the gameplay are particular revolutionary, but four players can play at the same time and this makes a fantastic experience even more fun. Add in an epic musical score and that unique isometric viewpoint and it makes for a real unexpected gem. 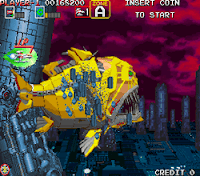 The Darius series is one of Taito's most famous and beloved franchises, but not one I've ever been overly familiar with. After playing Gaiden for five minutes though I could tell that this would change...and soon, the game flies along at a fantastically fast pace, and although it is very chaotic at times, you never feel like you're just along for the ride with no control. The graphics are big, bold and colourful, with some hugely impressive enemies appearing along the way...the Golden Ogre from the end of the first stage is a genuine "wow" moment. Darius Gaiden also happens to possess one of the most extravagant soundtracks I've ever heard from a non RPG, there are haunting vocal melodies that are almost operatic at times (sounding very much like Parasite Eve on the PSX). A real surprise this one. 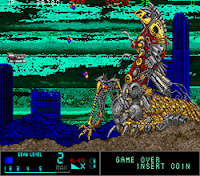 Here we have another horizontal shoot 'em up and one that I have to admit...is an absolute revelation! Metal Black is home to some properly charming visuals, and especially worthy of note are the sumptuous backgrounds (which remind me somewhat of Square's Einhander) and the insane end of level bosses, which are absolutely enormous and so well drawn. One of my favourite aspects of this game though is the power up system. You collect small additions to your weapon capability throughout the stage, and this enables you to unleash a massive beam attack when required. Interestingly though, the bosses can also snare these power ups and launch a ridiculous over the top attack of their own, ensuring that these battles often get quite interesting. 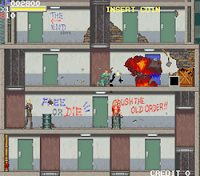 Having been a huge fan of the Impossible Mission series years ago, the looks of this game appealed to me straight away, and although Elevator Action Returns is much heavier on death than stealth, it's still a thoroughly enjoyable romp. You choose from three (pretty cool) secret agents, each with their own strengths and weaknesses, the objective is then to travel to different buildings and disarm bombs that have been that are set to detonate...whilst also giving the good news to any bad guys that get in your way. The controls are glorious, helping the game to flow at just the right pace, the animation is top notch and as well as gloriously distinctive graphics, there are also an admirable number of anime style cut scenes along the way. As with all the best arcade games, you can have a friend tag along with you to add to the fun (and chaos).

Overall then this is a fine little collection of games from yesteryear...some are proper classics, some are not (in the slightest), but all at least have a distinct story to tell and all are worth at least five minutes of your time. I found myself remembering a time when high scores did actually matter and when video games were unmerciful in their difficulty. I used to play these kind of games throughout my childhood, but for years now I've been a massive fan of console and JRPGs, the Taito Legends collection made me realise just how rusty my gaming skills have actually become. With this in mind I think it's time to put Rudra No Hihou on the back burner for a while and attempt to rack up some respectable scores on the likes of Syvalion and Puzzle Bobble.

The one major gripe that I have with this collection is that Bubble Symphony (Bubble Bobble 2) was only available on the XBox version...that does stink a bit of money grabbing to me, but it's not enough to spoil the overall experience.

As a footnote for anyone who's interested, the full list of games contained in this fine collection are as follows.
Posted by Paul Darbyshire at 19:52