A decade too late? In defence of Astonishia Story 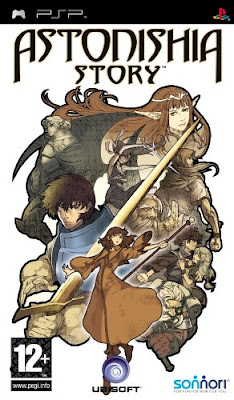 Astonishia Story is a RPG/SRPG developed by Korean company; Sonnori. It was initially released on the PC in 1994 and then in 2002 it was given a remake (also on PC), which was ported to the GP32 handheld and eventually Sony's PSP.

As I write this, I'm painfully aware that my opinion of the PSP port of Astonishia Story leaves me very much in the minority (possibly of one). Almost everywhere I've looked, this game has been ridiculed, derided, and often dismissed as useless, boring and even unfinished. I'm not so sure it deserves such harsh treatment though.

Now although I do have a genuine affection for it I'm not one to ignore the facts, Astonishia Story has some pretty major faults to contend with. It has by far the most abysmal (and literal) translation I've ever come across in an officially released title (yes, even worse than Breath of Fire 2 and Paladin's Quest), it is littered with grammatical errors, the characters are also overly clichéd as is the story and when you place it up alongside the visuals in some of the PSP aristocracy, it looks like belongs in 1994 (because in essence, it does).

Add to that lot, a strangely severe imbalance between enemies which can see you skip through a few fights with relative ease, and then get nailed for no apparent reason, and it's not difficult to see why so few people give it the time of day.

Those aforementioned indiscretions aren't enough to dent my enthusiasm. This quirky and old fashioned Korean RPG has bucket loads of the 'X factor' that many of us crave in a video game, and as a result it holds a special place in my heart.

The 2D visuals, while looking somewhat dated are beautifully drawn and boast delightfully intricate animation, which actually isn't too far away from the level of Suikoden 2 and Wild Arms. In fact I'd probably say that graphically Astonishia is very reminiscent of RPGs from the peak of the 16bit era...only with an added flamboyance.

Each town and village is packed with the kind elaborate detail that borders on unnecessary, such as ticking clocks and birds flying overhead, and I know this doesn't sound overly impressive in 2013 but to me it's an indication of just how much the developers cared about the overall look and feel of the game. Though never mind blowing, the world map is also pretty and is somewhat reminiscent of Chrono Trigger, with the usual sprawling mountain ranges and and rolling hills. The characters, both lead and NPCs are well designed and each main star comes with their own beautifully styled portrait that pops up for conversations (again, very Suikoden). This adds a deal of personality to each scene...more indication of effort on Sonnori's part.

Sonically there isn't much to blow the mind...and Chrono Cross, it certainly ain't. The typically pleasant and generic RPG tunes are present and accounted for, along with a few stand-out pieces to raise the bar at important moments in the story. All in all it does a good job of transporting you back to a simpler time.

Astonishia's Achilles heel is oft seen as its much maligned story. I can only comment on the English language translation and unfortunately it is dreadful. In fact I'm genuinely surprised Ubisoft chose to publish the game in this state, and I can only surmise their QR department was on holiday that week...or they just didn't care. Either way it's a real shame because there are numerous moments when I could see glimpses of an excellent story poking out from under the layers of dodgy spelling and lazy grammar. Anyone who's experienced Enix's botched translation of Lennus (into Paladin's Quest) will know what I mean here. And even though the game's ability to convey moments of emotion have been stunted, there are still both heart warming and heart wrenching scenes to be appreciated.

The battle system is probably this game's shining light and is both efficient and challenging. Those who have dabbled with the likes of Fire Emblem, FEDA or Langrisser will feel instantly at home with the grid based, strategic layout. Tactics play a significant part in each battle, to the extent that a couple of wrong moves can see your party get wiped out...which brings a stop the monotony often experienced with battles in many turn based RPGs

All this geniality is nicely wrapped up in a glorious and typically over the top anime styled intro...complete with obligatory cheesy guitar work. Textbook brilliance if you like that sort of thing (I do).

So if you're the kind of person who has more than a passing interest in 90's RPGs, specifically the era of the SNES/SFC, Mega Drive and PC-Engine, and can put up with a few (substantial) foibles, then you should really consider giving this outcast some consideration. It has so many of the ingredients required to make a solid and enjoyable RPG and what's more, because it's so unpopular you can pick it up for next to nothing...result!

Astonishia Story did spawn a sequel of sorts, known in the west as Crimson Gem Saga. This game was actually translated properly and is a real leap forward in terms of graphics and sound. It is definitely worth checking out too.
Posted by Paul Darbyshire at 17:20