We're now very much at the business end of the countdown, and into the realm of very special box art. I certainly hope the next few pieces don't disappoint!

The Valis games are very well known in PC-Engine and Mega Drive circles. Luscious anime visuals, solid hack and slash platforming and (in the PC-E games) fantastic cut-scenes, made this much loved series a darling of the import scene in the UK. But it wasn't until the fourth, and penultimate instalment of the saga that Telnet finally saw fit to give their sword wielding maiden a run out on the Super Famicom, in the form of Super Valis IV.

Although the SFC release is a port of the PC-Engine title, there are several notable differences between the two games. Gone are the elaborately animated cut-scenes, along with a couple of stages and the ability to use choose from three different characters. The developers did however add a stage exclusively designed for the SFC. 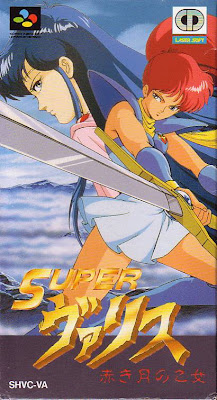 This is hands down, my favourite piece of anime styled box art on the Super Famicom. Although it could be accused of being slightly plain, I think that the simple design really helps to put the focus solely on the wonderfully drawn characters. This is the kind of stuff we were used to seeing on the front of the latest VHS from Manga Entertainment, and it's another game that I was smitten with from the minute I saw it. 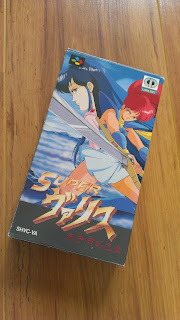 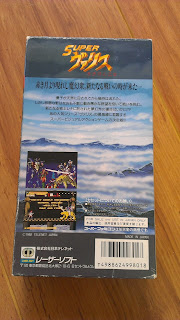 I often cite Super Valis IV as a prime example of just how much of a difference there was between the box art of games released in Japan and those that made it to Europe and North America. If you're interested in just how different the two versions are, then you can view the US art at Gamespot.
Posted by Paul Darbyshire at 15:27