To many video game aficionados, Konami's Goemon series is held in both high and loving regard. The eclectic mix of Japanese folklore and completely off the wall humour, wrapped up in extremely well designed games struck a real chord with those who looked to the east for their digital fix.

Ganbare Goemon 2 once again follows the escapades of title character Goemon, his brilliantly wacky sidekick; Ebisumaru and now robotic clockwork ninja; Sasuke as they attempt to halt the evil General Magginesu's plans of westernising Japan (textbook!). As you'd probably expect, all sorts of crazy shenanigans happen along the way, with a guest appearance from Sparkster and the giant robot Goemon Impact being amongst the highlights. 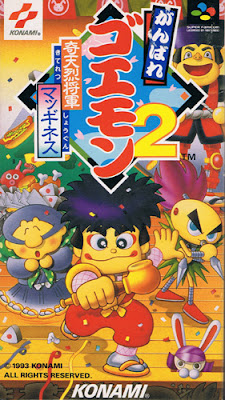 I never really know where to start with this design...it's totally nuts! The stand out stuff for me has to be the towering figure of Impact in the background, the mischievous army of bunny men on the reverse of the box and of course, the awesome Ebisumaru, who always looks like he's about to get into to trouble. 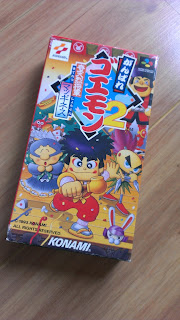 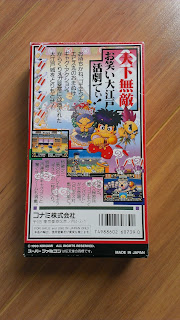 This game (and its artwork) epitomises everything that I find fascinating about Japanese video games, and from the first time I saw it in a Super Play feature, I knew that it was one I'd need to own at some point. Just imagine how radical this looked to a 12 year old kid from Liverpool...you just didn't see this sort of thing round my way! Even though it was sadly never officially translated, the absence of really heavy text means that you can get through it with little fuss and maximum enjoyment, and so I'd urge any fans of wacky, fantastic video games to hunt down a copy.