Here we have a video game colossus that really needs no introduction. If you're a fan of console gaming, then it's likely at some point you've played Super Mario Kart (or at least one its various offspring). A great many games are often hailed as revolutionary or genre defining, but in this case that tag actually does apply. 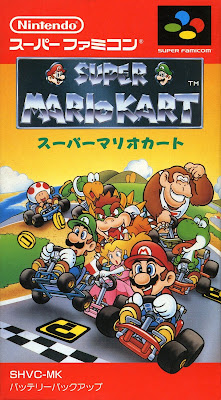 Although there's nothing hugely clever or jaw droppingly pretty going on here, I've always found the Super Mario Kart artwork totally bewitching. The ingenious use of some of gaming's most lovable characters and the promise of bags of vivid and colourful fun, is one of the most powerful images of the 1990's. Mostly though it harks back to an age where Mario still had a bit of belly and a weft of innocence about him, and when a young lad from Liverpool (me) was left wide eyed at the prospect of racing a koopa trooper around a beach! 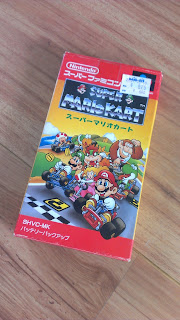 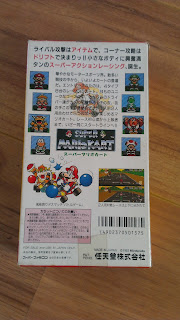 I think the biggest tribute that I could pay to Super Mario Kart is that even though it was released some 20 plus years ago, it still remains the most fun I've ever had playing video games. And I honestly can't see anything displacing it.
Posted by Paul Darbyshire at 14:39