So we arrive at number 7 in my Super Famicom box art countdown, and what's this...no giant mechs thus far?! Fear not, as this will now be addressed with the very interesting Vortex. Developed by British company Argonaut; Vortex was one of the first (and few) games to show off Nintendo's shiny new Super FX chip and gave 16bit gamers a taste of what Transformers could have looked like on the SNES. 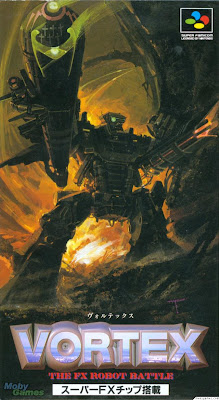 I've got to be honest, part of me thinks this box art should have been number 1 in the list, but the RPG fan boy in me (and my girlfriend) just wouldn't allow it. It is however, absolutely stunning.

It's very rare I've come across a piece of Super Famicom art that's so foreboding and so...epic. The level of detail on show on the giant mech (named 'Morphing Battle System') beggars belief and the background only serves to exaggerate the scale of the metal behemoth. This picture looks like it's been taken straight from the cover of a sci-fi novel about a distant and apocalyptic war.

The reverse side brings with it a slice of reality with some screens of what the game actually looks like, but seriously, you tend not to pay it much attention. 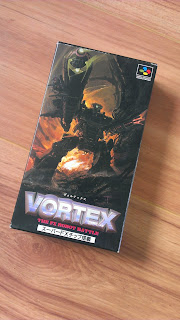 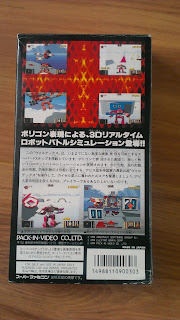 Although Vortex is a fine game, and uses the SFX chip remarkably well, I can't help feeling that it suffers from a classic case of the artwork being just too awesome for the game to keep up. That said, what Argonaut achieved with just a measly 4mbit cart is astounding, and I'd have loved to see what they could have done with a bigger 16mbit cart.

This particular example was purchased from the wonderful Genki Video Games. Check them out!
Posted by Paul Darbyshire at 17:30