Instantly recognisable to all fighting game fans, Garou Densetsu (released in the west as Fatal Fury) was SNK's attempt at muscling in on the 2D brawling craze caused by Street Fighter 2. And what a series it is! Boasting BIG sprites, colourful characters and the very impressive plain shift technique, Garou offered a striking alternative to the Capcom standard. 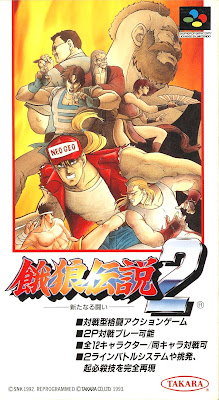 I became interested in the art of SNK titles (and in the games themselves) the first time I happened upon a feature about Art of Fighting in an old magazine, but it wasn't until seeing a preview of Garou 2 in my beloved Super Play, that my love for all things SNK really blossomed.

Though Garou 2's artwork is not as "pretty" as that of something like Wonder Project J, there is something about it which appeals greatly to me. Seeing this rag-tag band of fighters strutting their stuff in hand drawn glory drew my attention instantly, and you can almost hear the shouts of "Power Wave" trying to escape the cart inside. 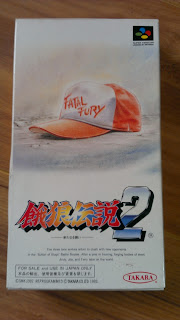 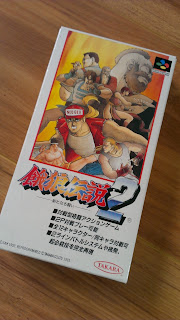 This dramatic style is carried over to the reverse of the box, which shows Terry Bogard's signature 'Fatal Fury' baseball cap lying discarded on the ground (thrown there in victory, I hope!). And as an added bonus there is a typically (for the time) epic message below the Garou logo, which speaks of the Lone Wolves taking on the world...if I'd read that in 1993, I'd have took up martial arts there and then!

Admittedly, I never enjoyed the Garou series as much as Street Fighter, but in terms of artwork alone, South Town's finest definitely scores the knockout blow.
Posted by Paul Darbyshire at 20:28